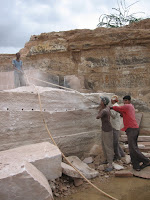 Dr. SM Mohnot arranged for a visit to a sandstone mining area 15 km outside of Jodhpur. The area is famous for the high quality sandstone slabs that are crushed there using hydraulic drilling, dynamite and hammers. In recent years, this area has become increasingly dependent on mining as the amount of annual rainfall has declined. We drove down the narrow roads of the town of Sursagar en route to a collection of mines in Keru.

I was initially worried about how the employer would react to our visit, but to my surprise he wasn't even there. Our guide informed us that he only comes to the mine around 3 days a week. This helps explain why he might not be concerned about the dust levels. Apparently the miners don't need much supervision as a certain output is required and monitoring this output is enough to run the mine.

We Interviewed a worker (through the help of a translator) named Sultan Khan, from a village 150 km away. His wife and children are in that village, but he spends most of the year here. He is 35 and works 8-10 hours per day and makes 100-110 Rs each day. During the rainy season, if there is no drought, he goes home and works in agriculture, but since droughts are common he must supplement his agricultural income by working in mines. When asked about silicosis he had never heard of it.

The mining process seems arduous and none of the workers were using face masks or protective clothing. The area was very hot and the workers were blanketed in a thick layer of dust. The drilling is also incredibly noisy from the drills. I can't imagine working in these conditions. The workers all seemed to be in a daze. I was there for just a short period of time but I felt nauseous from the dust for awhile after my visit. On the way back, our guide described the situation as an "open jail." I think it might be worse than that.
Posted by mutgoff at 1:11 AM