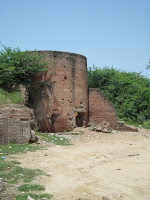 On Friday August 29, Dr. Gupta offered to take us to an old stone crushing site in Delhi. We met him at the hospital at 10 AM and off we went in a lovely air conditioned car. As we drove I was able to pick Dr. Gupta's brain a little more which was awesome. We talked about unorganized work sectors where employees were exposed to high levels of silica. He spoke about the importance of awareness of hazards in the workplace . A huge challenge he faces is illiteracy within these communities.

When asked what he thought the best solution to these problems was he focused on alleviation of poverty. He spoke about the drawbacks of free trade and how technology from the developed world comes to India without the transfer of education to the workforce. As these industries move into emerging economies we must ensure workers are aware of the hazards within the workplace.

Dr. Gupta told us an interesting story about a trade union that worked with a factory that manufactured radios and televisions using old vacuum tube technology. The trade union was giving workers a glass of milk every day and saying that this would help with metal poisoning. In fact, milk does not help with metal poisoning. Dr. TK Joshi told them this and said that if they were going to distribute something an apple would at least be more nutritious and helpful to the workers. When he tried to work with the employees to get this change done the workers just preferred the extra five Indian Rupees (around 13 cents) a day the apple would cost and consequently both programs were canceled. Often when workers are made to understand the hazards they are working with they just want more money rather than safer conditions.

We arrived at the old stone crushing mine to find a very impoverished community. Dr. Gupta showed us around and it was amazing to be right next to something I had read so much about and seen so many pictures of. The people in the community seemed very interested in our presence and Dr. Gupta was even approached by someone who recognized him from his work in the field there.
Posted by mutgoff at 2:37 AM