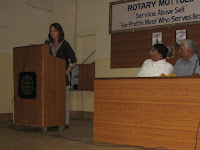 We were invited to attend a meeting of Jaipur's oldest Rotary Club to speak about our organization. I didn't really know what to expect so I prepared a few notes and thought I would adjust my speech based on the other speakers who were to go before me. The first 30 minutes, which was spent having tea and some traditional Indian snacks, was productive. I went around and introduced myself to the various members who turned out to be local businessmen, many who work in industries I am trying to reach. They were receptive when originally introduced to me but the phrase "occupational health" is never very exciting to anyone. They mostly wanted to talk about San Francisco and their kids who were in America. I humored them and talked about San Francisco, but gave them a brochure and made it a point to at least get in a few words beyond "occupational health education." We all sat down and the meeting began with recognition of teachers day and some opening ceremony in Hindi. But to my surprise the entire meeting was in Hindi. Damn you Rosetta Stone for being so expensive at airport kiosks! Why have I not learned much Hindi!? Well, two long speeches went on and I didn't have the slightest idea what they were saying. The only thing I gathered was that they were too long and that the audience wanted to get out of there. So when my turn came I was brief and frank.

I basically said that such a group of talented businessmen should understand that keeping their workers safe and healthy was a good investment for them and that I could help in this regard. 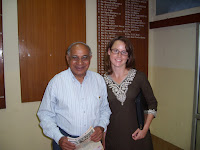 I said that there are simple measures employers can take to mitigate occupational health hazards and that these measures were much cheaper than the workers compensation and retraining of new employees they would surely face if they left their workers in hazardous conditions. I think it went well because the president of the club thanked me for being brief and several businessmen gave me their cards and asked me to contact them.
Posted by mutgoff at 10:41 PM

That is wonderful, I am glad you were able to speak directly to industry. Great work.