Bush and OSHA: the End of an Era?

As the final days of the Bush Administration slowly melt into history, so many final histories on each department and agency are being published by several news organizations. A final note on OSHA was not lost in the mix.

The AP published a seemingly blistering report the perceived politicization of the agency over the last eight years.

In early 2001, an epidemiologist at the Occupational Safety and Health Administration sought to publish a special bulletin warning dental technicians that they could be exposed to dangerous beryllium alloys while grinding fillings. Health studies showed that even a single day's exposure at the agency's permitted level could lead to incurable lung disease.

After the bulletin was drafted, political appointees at the agency gave a copy to a lobbying firm hired by the country's principal beryllium manufacturer, according to internal OSHA documents. The epidemiologist, Peter Infante, incorporated what he considered reasonable changes requested by the company and won approval from key directorates, but he bristled when the private firm complained again.

To be fair, throughout the article administration officials are quoted as saying that listening to corporate voices ensured that the agency did not hurt the country's economic competitiveness. While I agree that corporations large and small deserve a seat at the table when any regulation that may affect them is being debated, it's hard to understand, however, why they were the only voice on so many occasions. Read the full report, "Indecision and Delay Characterized Bush's OSHA".
Posted by Jonathan Zuk at 6:08 AM No comments:

The Indian Government is proposing mandatory yoga instruction at all of the country's primary schools according to the Indian news blog, Good Read. Health Minister Anbumani Ramadoss noted that yoga has been proven to reduce diabetes, hypertension, and stress.

Adult-onset diabetes has been linked to risk factors like ageing, an inactive lifestyle, unhealthy diets, smoking, alcohol and obesity.

The silent chronic disease damages the heart, blood vessels, eyes, kidneys and nerves and was responsible for 3.8 million deaths worldwide in 2007.

India carries the highest diabetes burden in the world, with 41 million cases in 2007 and that is estimated to hit 70 million by 2025, according to the International Diabetes Federation. (source: Good Read)

Since hypertension and adult-onset diabetes can also be linked to occupational factors, I think the Health Ministry or Labor Ministry should make a similar push for yoga in the Indian workplace. Perhaps not as a national mandate, but certainly the government could work to provide incentives to companies to develop yoga-focused preventative health programs at their facilities.

Posted by Jonathan Zuk at 1:30 PM No comments:

The Kingdom of Bahrain has pledged to train nearly 200 OSH professionals through its government-funded labor fund, Tamkeem. Like many other developing economies, Bahrain has found itself awash with reports of occupational health injuries and disease, yet there are few professionals in the country certified in the discipline.

Quoted in the Gulf Daily News, the project's managing director, Hassan Ali noted that the program will make Bahraini companies more competitive compared to companies in developing countries that are not as compliant with international OSH standards.

"The globalisation of the workplace and of business means that Bahraini companies can increase their business by complying with international OHS standards as required by big-ticket projects," said Mr. Ali.

The Bahraini Government is setting a great example with this move. The need to train and certify OSH professionals in developing countries like India. Following our visit, both of us were convinced that worker education will yield only minimal results without first developing the professional framework that is needed to properly diagnose and treat workplace injuries and diseases. Kudos to the Kingdom of Bahrain for recognizing this fact and realizing the benefits that such training programs bring to the country's global economic competitiveness.

Posted by Jonathan Zuk at 8:01 PM No comments: 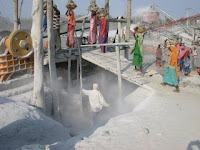 Last week I met with Perry Gottesfeld, executive director at Occupational Knowledge International, who has agreed to partner up with Work-to-Live for our first project. OK International is a San Francisco non-profit organization dedicated to improving public health though innovative strategies to reduce exposures to industrial pollutants. They have been working on a project in India to Reduce Health Hazards Among Stone Crusher Mill Workers. Stone crushers are exposed to airborne silica and suffer from silicosis, cancer and other harmful lung disease.

As I have been trying organize a workshop in India that teaches medical professionals how to diagnose occupational lung disease, things have been tough. When I'm not in India my communications with doctors over there is slow. I have also never put together a medical workshop.

My passion and integrity are there, and I have researched the subject enough to know what is needed: education for medical professionals. I just don't think reinventing the wheel is really necessary in this case. Basically, I started to feel like I needed help. With the help of the experienced and dedicated staff at OK International I am confident the workshop we put together in December of 2009 will be effective in helping doctors in India treat patients who suffer from occupational lung disease.

Posted by mutgoff at 4:33 PM No comments:

In January, University of Pittsburgh professor Dr. Don Burke blogged about his recent visit to Hyderabad, India to explore possible partnerships that the University could undertake with Indian institutions. Dr. Burke found that the prospects for partnerships were excellent. He highlighted two community outreach programs that he saw as models for future success: REACH (Rural Effective Affordable Comprehensive Healthcare) and CATCH (Community Access to Cervical Health).

Each of programs described rely heavily on community organizers and physicians to advocate for and help implement its goals. The doctor's posting highlights the potential for similarly organized occupational health organizations to reach the same levels of success.
Posted by Jonathan Zuk at 2:07 PM No comments:

A new study published in the International Journal of Occupational and Environmental Health finds that over one third (34%) of females working in a quartz-crushing mill in rural Gujarat, India are showing symptoms of either silicosis or other related respiratory diseases.

The study shows that most of the cases of silicosis, silico-tuberculosis, and tuberculosis came from exposure of less than three years and that by and large these workers are suffering from more acute forms of illness than in years previous. While silicosis has always been considered an occupational health risk to those working with quartz dust, it was not until recently that such acute forms of the disease started becoming so prevalent.

According to the article, the more mechanized fashion of creating quartz powder is to blame. The process is described below (page 1).

Quartz powder is produced by placing quartz stone into a mechanical jaw crusher, where large stone is broken into smaller pieces. These pieces are trans-
ported by conveyor belt to a disintegrator, which crushes them into powder. Finally, a vibrating screen separates out powders of various fineness. All these processes generate large amounts of free silica dust, placing workers risk of silicosis and silico-tuberculosis.

Read the full text of the article, "Respiratory Health of Female Stone Grinders with Free Silica Dust Exposure in Gujarat, India" to get a more detailed understanding of the health crisis. Traditionally, most occupational diseases take much longer to progress, but this team's recent findings add further evidence that newer forms of technology seem to be compressing the duration of exposure exponentially.
Posted by Jonathan Zuk at 11:22 AM No comments: