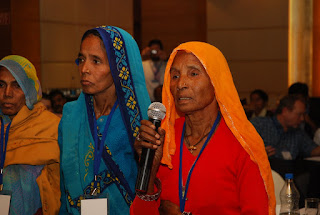 Work-to-Live sponsored and participated in a conference held by OK International to address disease from Silica dust. Our role was mostly to document the discussion around Silicosis in the developing world. We hired a film crew from India who showed up with 12 people! I've never produced a film before, so managing 12 people proved to be a challenge. Not to mention the fact that I'm in India and don't speak Hindi. Hopefully after some editing we will have some compelling footage and this will be a jumping off point for awareness around occupational health issues.

OK International did a great job bringing parties together to discuss awareness and possible solutions to the impacts of Silica exposure in the developing world. Participants included Indian NGOs, Labor Minister Shri Harish Rawat, The World Bank, The Public Health Foundation of India, The World Health Organization, an advocate from the Supreme Court of India, and a Medical Director from the Central Lobor Institute. A New Dehli Based NGO even brought Silicosis victims to plead for government assistance.

It was a great group with heated discussions. NGO's challanged government officials for not doing their jobs. The need was discussed for confidence building by regulatory authorities. It was also pointed out that employers in India do not think of employee health as an investment but as welfare.

At times the discussions were really depressing. The people who work in the unorganized mining sector are unskilled workers. It's hard to present the economic advatages to employers of keeping workers healthy, when those workers require little or no training. On the bright side some engineering efforts have led to effective and affordable solutions.

There is much more to be said about the conference and I hope to blog about it more. But I'm going to relax for a few days and gather my thoughts.
Posted by mutgoff at 8:07 PM No comments: