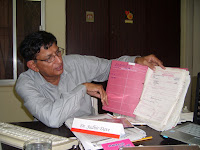 I took an overnight bus from Jodhpur to Ahmedabad to meet with Dr. SK Dave who worked for NIOH (National Institute of Occupational Health) in India from 1982 to 1999. He now works for the Oncology department at Gujarat Hospital. I have been emailing with him for more than a year and we have not accomplished much over email. I am amazed how much we were able to accomplish in a short meeting because we were face to face.

He says there is a lot of surface mining of rocks containing tremolite done by unorganized cottage industries in Dogrh. The rocks go into milling units and are crushed and sold. This material is dispatched for the manufacturing of non-pressure asbestos cement pipes. This piping is used in poor villages for irrigation. These pipes are poorly made and have leaks which contaminate ground water. They would be better off using iron or copper but these materials are very costly.

Dr. Dave works at one of the best cancer hospitals and research institutes in India. Their oncology department has been trying to create a cancer registry with some difficulty. He tried to create a database but finds doctors in the villages are just not willing to use a computer. Then he dropped a notebook off with village doctors but they were still not reporting much of anything. When he added a financial incentive to report (10 rupees per reported case) he was able to get some responsiveness. I asked him how he was able to ensure that these were accurate given the incentive to over-report. He said he does follow-ups with patients and looks for unusual patterns but that some over-reporting was a problem at first. He said recently he has been getting patients referred to him from southern Rajasthan with mesothelioma and pleural effusion who have not been working in the mills or mines. Most of these community exposures have not been explainable.

While my organization is not willing to jump into a study that will simply show the dangers of asbestos (we already know asbestos is dangerous), I would be willing to contribute to a study of victims of community exposure to asbestos. He said I should think about going around southern Rajasthan next time I am in India and making sure local doctors know what to look for so that proper patients are referred and documented. I am interested in knowing as much about community exposures in Rajasthan as possible and Dr. Dave is going to assist with this project.
Posted by mutgoff at 7:16 AM

I am an American asbestos expert, a mineralogist and physician with 32 years of research in the field and numberous publications.
Thisis my third attempt to post to this site, so I'll keep it short. I can help you. PLease e-mail me awt mgermine@hotmail.com