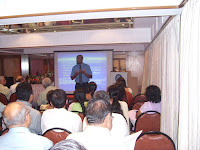 Dr. Hemantha Wickram of Sri Lanka's National Institute of Occupational Safety and Health (NIOSH) gave a presentation which outlined how the environment and occupational illness fall hand in hand. In school he studied carbon monoxide poisoning and found that underground parking lot attendants were having breathing troubles due to the poor ventilation engineering. He echoed what we had heard about unorganized sectors and how fragile those communities are in the developing world. Much of his talk was about the growing prevalence of HIV/AIDS among workers in his country. He spoke of "seafarers" and actually used the Austin Powers line about them going from port to port and spreading disease. He noted that since Sri Lanka has been developing and young people are coming from the rural areas, HIV is spreading rapidly in this community. The young migrants who come to Colombo are grouped together in group housing and females often turn to commercial sex work since they are not paid enough at their day-time jobs.

He talked about the use of personal protective gear which is of particular interest to me. I have been getting mixed answers about whether people are willing to wear masks in mines if given the option. In his studies, he found that workers do not use protective gear unless forced to by their employers. In Sri Lanka (as well as India) farmers spray pesticides without any protective equipment. In such hot weather it is very uncomfortable to wear protective gear so convincing someone to do so is nearly impossible.

After his presentation, I introduced myself and Dr. Wickram was very excited about an NGO from the United States working on occupational health education. We exchanged contact information and agreed to explore possible projects in Sri Lanka. I asked him whether or not he knows of any organizations trying to develop more comfortable protective gear. He said he did not know of such gear, but that he wanted to explore the idea.

Dr. Joshi, the organizer of the workshop, gave a summary speech. He told the story of a factory where different levels of exposure were divided into three categories and the workers were divided accordingly and wore appropriate protective gear for their area. The workers were frequently tested for their exposure levels. They found some young girls in the lowest exposure area who were recording extremely high levels of cadmium. They ordered a retest but found the same thing. The medical professionals dedicated a significant amount of research time into figuring out what was going on. Finally, on a trip to the plant, they noticed the girls biting their fingernails. This habit of nail biting was causing these girls to be exposed to a much higher level of cadmium. The story made a good point about the importance of actually visiting places of work to find what might be making workers sick.
Posted by mutgoff at 11:35 PM