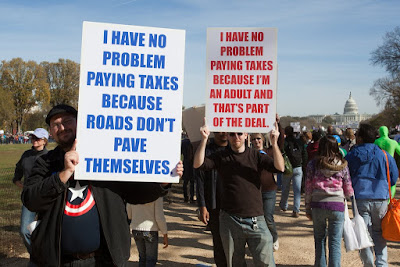 markets are self-regulating ->
Reading this and knowing people believe it makes me cry.
Posted by mutgoff at 8:30 PM

Yeah - good article, it's all nice in theory but there is no such thing as a free market and hence the greed factor.... and twisted sickness in this world that we are all a part of... The hand doesn't need to be smacked, it needs to be smashed with a hammer.... starting with me... Capitalism forces people to screw everything else with continual growth... But do we really need all this crap in the first place?

The way I look at is that yes, we do need some of that "crap" and someone needs to provide it to us. It's the society that we've evolved into and now we have to figure out how to make it better. There are some really interesting new (and not so new) companies that are providing people with a choice as to what kind of company they buy from and what types of products and services they buy. What we have to do is get on that band wagon with, support those companies and demand change. I like the article.